Ruins of a Coastline

Bläske: You worked as a lawyer before becoming an artist, but you’ve always been a runner participating in many marathons. You regularly run along the coast in Beirut. What do you see there?

Abichahine: Running is multi sensorial: I feel connected to the places I run in. I often explore stretches of the coast establishing a relationship with the space through breathing. I recognize Beirut from its odours, I can recognize areas by that sense. For instance, I witnessed the crisis through the smell of the streets, and I know where I should block my breathing. It is counterproductive when running is all about breathing, but often tragedy has a smell…  I see the sun reflecting in the water. I hear the laughs and cries of children. I catch discussions between lovers hanging out on the corniche. I hear the loud music of people whose only place of relief is the sea. I see a rare opportunity for a public space, which is intentionally the last one left to the inhabitants of Beirut. A place to which everyone has free access.

Bläske: What has changed over the years?

Abichahine: The Beirut landscape has changed dramatically in the last decade. Many old houses have vanished, new beasts have been erected. This urbicide generates a sentiment of injustice highlighted by obstructions of public spaces. Along the shore, private resorts occupy the sand that belongs to the people. Beirut is an ever-changing landscape and its corniche is its open-air theater. In my work, I tried to catch the unfaithfulness of Mediterranean landscapes. We are never sure to find them when we come back. I experienced this “Choreography for a woman and a stone” every time I ran in Beirut. The longer the road, the more powerful is the choreography.

Abichahine: In Beirut, it holds the beautiful natural Grotto aux Pigeons. Natural stone with fauna and flora specific to our coastline. First, I was planning to run along the coast between six ports. The idea of the port as an entrance and exit from land to sea is fascinating. Its organization and its relationship to people can say a lot about the economic and socio-political reality of a country. Every city has its own relationship with its port. Unfortunately, the Beirut Explosion changed my plans.

Bläske: You told me about problems at the Beirut port some weeks before the explosion.

Abichahine: Before the Beirut explosion on August 4, in my project, I had already described the port as an opaque, closed area dividing citizens between corrupt civil servants and dominated consumers. I had to face it at the age of 25, the first time I returned home after studying abroad, and refused to pay a backhander to receive a parcel I sent from Paris. The industrial port of Beirut has always been known for its corruption. Who knew it would go so far? Some did know, yet… Disaster is part of Mediterranean cities. 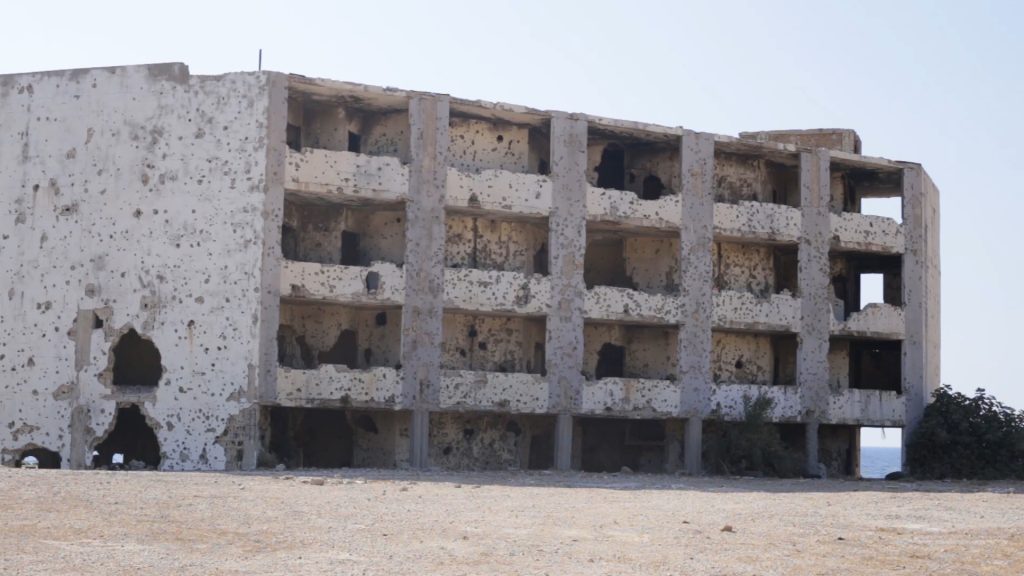 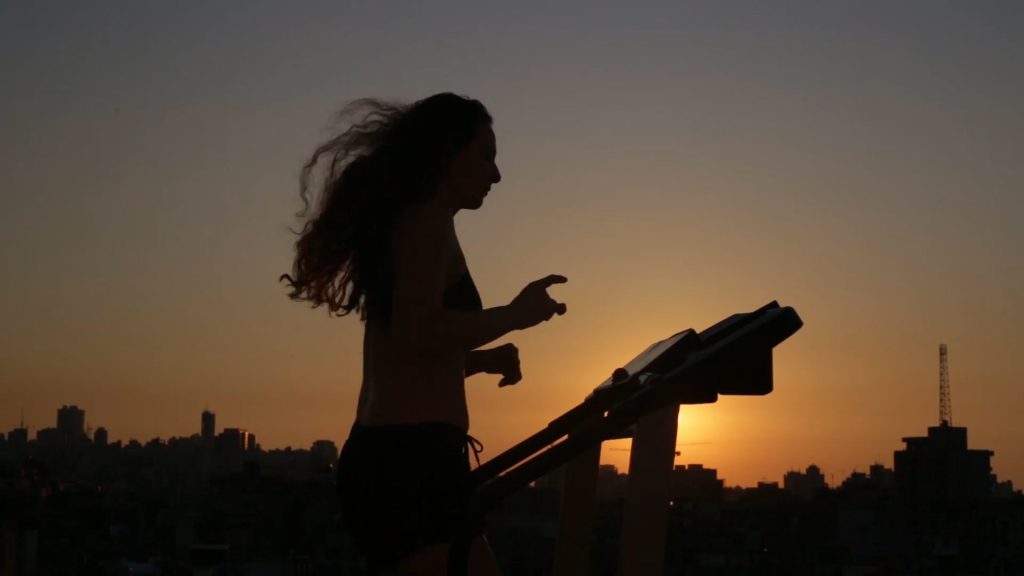 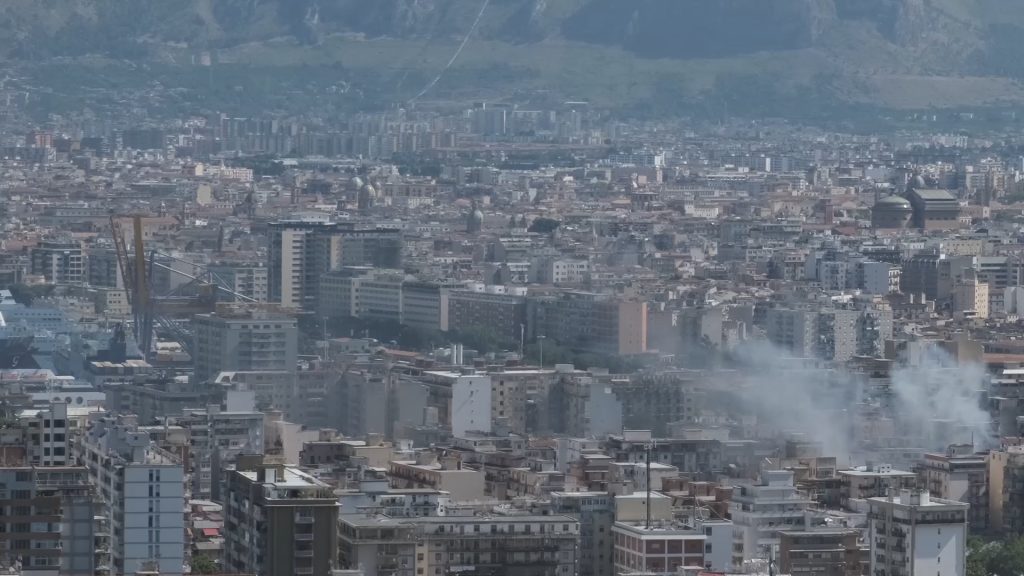 Bläske: Your upcoming staging Our Sea: Choreography for a Woman and a Stone is about the vulnerability of people, landscapes, and your own body.

Abichahine: The body is my first artistic interest. It is also the topic of my current PhD: the body in movement, the relationship between the body of the performer and the body of the city. For the Lebanon-Sicily diptych, I am directing my first video performance. I am exploring the ephemerality of cities and bodies, one containing and absorbing the other, putting my own body on stage. People’s vulnerability often results from land policies. And I am interested in how politics impact the body.

Bläske: Can you give examples?

Abichahine: The body in Beirut is hostage to pollution, obstructions and hostilities. We can see that in the lack of public space, from gardens to recreational hubs, but also sidewalks and public beaches. In Sicily, ecomostris are an example of how illegalities on the coastlines take place. Despite that, there is the possibility of enforcement of the law, whereas in Lebanon it is hard to stop real estate plans even when their legality is questioned. Corruption is regularizing their situation, keeping the construction sites ongoing. It is sociologically interesting to look at the way in which countries and cultures deal with their coast and connection to the sea.

Bläske: Buildings, bodies and corruption. How are they related?

Abichahine: Mafia is a multifaceted phenomenon of corruption and criminality. It has killed bodies and souls both in Italy and Lebanon. Natural catastrophes too: Beirut was destroyed seven times by earthquakes, as much as Gibellina or Poggioreale in Sicily. Disaster is crystallized in stone and performance. In my work, I explore the miseries and pains of our cities by observing stones: the layers of history and ruins of Palermo and Beirut, their questionable construction and destruction. Our countries evolve without escaping tragedy in a circular way. In Lebanon, if stone could speak, it would be the perfect witness to our past and present. Facing impunity and fatality, even stone is left alone, when exodus happens as today. Indeed, construction is one of the three sectors for mafia-made money.

Our Sea: Choreography for a Woman and a Stone is the first installment in a series of myths, realities and explorations that will take the Lebanese marathon runner, performance artist and director Lily Abichahine through coastal cities across the Mediterranean Sea. Accompanied by the Sicilian video artist Genny Petrotta and the sound artist Jad Atoui she runs through the ruins, sites of construction and continuous destruction along the coastlines of Beirut and Palermo – witnesses of a continuous cycle that entails wars, disasters and fatal urban illegalities. The tragic commonalities of the two cities are staged through the exploration of the myth of Sisyphus.

Autostrada Biennale: the creation of the art work as a form of learning